Home > Fishing within the Brooks

Fishing within the Brooks

Fishing site locations with the Brooks

Our thanks to Larry Winston and Tom Heaton for working with the CDD on providing spots to fish without the littoral plants making it difficult to land fish. 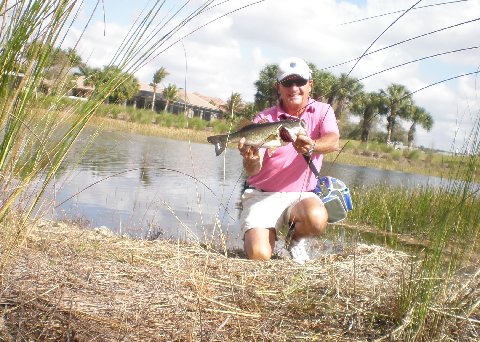 The other areas are all on the banks of Halfway Creek which is the waterway that you cross by bridge between holes 2-3 and 7-8 on the North Course. Most of the sites are on the south side of the Creek and are easily accessible from the bike path that runs along that side. There is one just as you leave Knollview at the end of the Creek before it goes under the road, several more as you head east toward the bridge, one on either side of the bridge, and two more further to the east with the last one where the boardwalk through the Preserve begins.

There are two clearings on the north side of the creek that are accessible by openings in the trees that border Knollview and by going thru one of those openings you have access to that whole bank.

Finally, there is an opening on the other side of Knollview (west) exactly opposite the first site on the east side where Halfway Creek goes under the road.

Larry Winston has fished each of those spots since they have been opened and has caught a good number of fish from them. Some of the spots still have weeds that come to the surface but landing fish is much easier now than before.